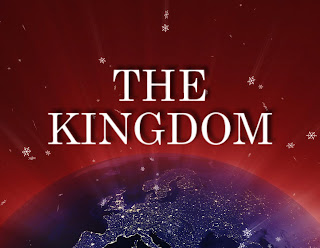 Today we kicked off our advent series simply calling it 'The Kingdom' . Advent comes from the Latin word Adventus which simply means "coming", it serves as a reminder of the original waiting that was done by the Hebrews for the birth of the Messiah, the coming of 'The Kingdom'. I grew up in the Pentecostal part of the Church so I never got to experience some of the rich tradition of the Church like advent so I indulged a little today and we even lite a candle.

When we come to this time of year, the Christmas story which we have heard so often can lose its punch. What does Jesus coming mean?

When Jesus came to those awaiting the Kingdom they had almost given up and lost all hope. Hope is what sustained the Israelites was the thought that at any moment the Messiah, The Kigdom. This hoping and longing helped them through all their suffering and man did Israel suffer, they had lost ten of their twelve tribes, the suffered slavery through the Babylonian captivity which was followed by further oppression, along side that they had no prophetic inspiration to give them direction. But what burned in their hearts was the hope of the coming one.

Suddenly and unexpectedly, strange and mysterious things began to take place. A wild-looking prophet appeared in the desert, predicting the arrival of the anointed one. He introduced a carpenter from Nazareth as the fulfillment of all Israel’s dreams. Yet in and through this carpenter something new began to take place. God was accessing earth through Jesus , Immanuel God with us. God’s commitment to us and this earth came through Jesus the Messiah.

Mk 1:15
Jesus show’s up and preaches this new message: After John was put in prison, Jesus went into Galilee, proclaiming the good news of God. 15 "The time has come," he said. "The kingdom of God is near. Repent and believe the good news!"


How good is good news? Have we undersold the eternity package? Pope Benedict said many people reject faith today, "simply because they do not find the prospect of eternal life attractive. What they desire is not eternal life at all, but this present life, for which faith in eternal life seems something of an impediment. To continue living forever - endlessly - appears more like a curse than a gift". But he concluded that Eternity was "not an unending succession of days in the calender" but an encounter with Christ after death which is "like plunging into an ocean of infinite love, a moment in which time, the before and after, no longer exists".

I love that, but eternity isn't about life after death, eternal life is given to us the moment we are baptised into faith through the Holy Spirit. The Kingdom is about bringing heaven to earth not the other way round. Do we see eternal life as waiting on the end game, to catch the rapture bus.

Jn 3: 3 1 Now there was a man of the Pharisees named Nicodemus, a member of the Jewish ruling council. 2 He came to Jesus at night and said, "Rabbi, we know you are a teacher who has come from God. For no-one could perform the miraculous signs you are doing if God were not with him." 3 In reply Jesus declared, "I tell you the truth, no-one can see the kingdom of God unless he is born again." Born again is saying yes to Jesus not to get people to heaven but to get heaven to here. The kingdom is where He is (His rule and reign).

My favourite gospel is Mark, hope its OK to have a favourite? Anyhow I love the pace, the God activity that has an urgency and an all encompassing message of hope that meets the tangible needs of the poor, liberates captives, gives sight o the blind eyes. Everything changes when He comes! We see how God interacts with humanity, bringing hope and freedom, Good News!

The Kingdom is not getting ready for heaven. The message is God is here. Therefor we need to get engaged, right wrongs, become hope pushers and hope dealers. God wants in the world and he wants into your world. God loves the world. How much Kingdom comes through your life. Will you be a hope pusher?

God wants to interact in this world, here and now.
Rom 15:13 May the God of hope fill you with all joy and peace as you trust in him, so that you may overflow with hope by the power of the Holy Spirit.

Will you pray your kingdom come? What resource of heaven do you want to see on earth? When he comes everything changes now that's the gospel, the good news.
Posted by jasondscott at 17:49