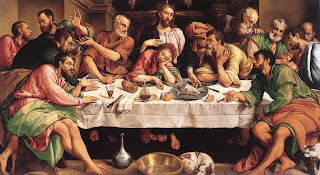 Today we continued the conversation 'I believe in The Church' with the idea that we are all called to invest & invite. A few years ago when I worked in retail a guy came into our gentleman's emporium who owned a Hotel in the city centre of Belfast. He ended up inviting me to a party, it was after music awards party, oh and he said U2 would be there. I thought yea right, I live an hour's drive away from the hotel and it won't kick off until about midnight and what's the real chances of U2 being there so I turned it down.
I wake up next morning to the news that U2 was in town and guess what they attended an after show party at 'THAT HOTEL'. Regrets, I've had a few....missed the party.
Meals in the Roman-Greco and middle-eastern era represent who can associate with whom in the larger society. They lived in an honor-shame society where the rich ate with the rich and the poor ate with the poor. We see this somewhat today but in Jesus day there was no middle class. Who you ate with determined who you are. There’s a narrative in the ancient scriptures; a king is arranging a banquet for his son. The king sent out an invitation from his servants to the expected guests (the religious-political-economic elites, royalty­). You would think that they would mark down the event on their calendar and be there at all costs! I mean this is the King’s invitation-this is very special but what happens? They insult the king, snubbed him. They were too busy for the king.
The king keeps inviting but they still refused and even mocked him and then others do harm and killed the King’s messengers.

Finally, the King does something that is totally against the culture. He invites everyone-those considered good and bad by going out to the streets and the highways to the poor, outcasts, riff-raffs-even prostitutes those considered least in society to come, to party, to fiesta! There are no strings attached when God calls you to the great fiesta-God’s kingdom.
The Kingdom of God really is a party not a prison; it’s everything you need to be satisfied. People having a blast just by the fact that they have been invited by God Himself. My dream for this Church is that God by His Holy Spirit would continue by grace to allow the Vineyard to be a place for all types of people regardless of their social, economic or ethnic background come and not just to feel they can come but that they feel welcomed when they do.
We said right from the start that the dream of this Church is that it be a place where the hurting, the depressed, the frustrated, the confused, can find love, acceptance, help, forgiveness, guidance and encouragement. The Church is a place that invites chaos in… Think about the party…the chaos the rag tag mob of brokenness.
People live in such chaos because they live in despair. We are responsible for bringing them the good news of the Kingdom not to be the moral police. It's not that we back away from sin. No not at all but if were are smart, we let the Holy Spirit come and bring change. Our deal is to bring the Kingdom of God, His rule and reign in their lives. Ultimately we are hope pushers Kingdom peddlers.
http://www.youtube.com/watch?v=iJ3-IZ1rT5g&feature=related
Dylan Thomas Wales’ greatest poet said “Do not go gently into that dark night….rage, rage against the dying of light”. It’s not that we are passive to the darkness no we rage against it and save the light.

The Spirit and the bride say, "Come." Let each one who hears them say, "Come." Let the thirsty ones come--anyone who wants to. Let them come and drink the water of life without charge
The Spirit and the bride which is the Church say come. The Holy Spirit and the Church are commissioned to invite those outside to come to the party. The Holy Spirit moves supernaturally, He draws people, devises ways so lost people can be found and as He moves we the Church shout come to the party. The message we should have hung over the doors is ‘you’re invited’
Posted by jasondscott at 14:34