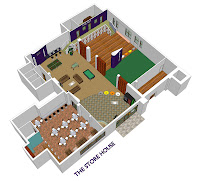 John appeals to the human senses, engages the physical for proof, the reality of God and life. To bridge the gap between the lost and God's authentic community called the Church there must be a physical reality. Wouldn’t be great to see that because of The Store House people you and I connected with would say “we have seen, touched and heard. “

The Storehouse is simply  compassion in action. It’s a mercy store where the poor can come and take, no questions asked, its a place where people who have never had anyone pray for them can come and have people consumed with compassion pray and ask the Holy Spirit to come and heal their hurts, the pain.

Let me finish with a local hero called Patrick

St Patrick recounts that he had a vision a few years after returning home:

I saw a man coming, as it were from Ireland. His name was Victoricus, and he carried many letters, and he gave me one of them. I read the heading: "The Voice of the Irish". As I began the letter, I imagined in that moment that I heard the voice of those very people who were near the wood of Focult, which is beside the western sea-and they cried out, as with one voice: "We appeal to you, holy servant boy, to come and walk among us.

Thomas Cahill notes that Patrick's love for the Irish "shines through his writings...He (worried) constantly for his people, not just for their spiritual but for their physical welfare."

Through Patrick, God converted thousands. Cahill writes, "Only this former slave had the right instincts to impart to the Irish a New Story, one that made sense of all their old stories and brought them a peace they had never known before." Because of Patrick, a warrior people "lay down the swords of battle, flung away the knives of sacrifice, and cast away the chains of slavery."

Here's to leaving a legacy

it was said that patrick started a fire on a hill in slain. i just get the feeling in my spirit that there might be another fire on the the way for this town and the whole of ireland.
i suppose its about us having the bottle to ask him for the town...
sometimes its easy to see the heart of jesus i think in this instance its called "The Storehouse" this thing has the heart of jesus all over it , but it needs supported.
come on folks lets start seeing a bit of healing in peoples lives,lets start to see hearts changed.:-)