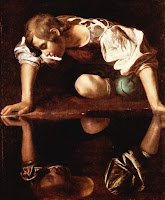 There's a Greek myth, an ancient parable that depicts self, the legend goes something like this; Narcissus's came by this calm still pond and as he gazed into it he fell in love with is reflections. The story has it that because of his self - absorption he couldn't leave his reflection and died by the pool.

We have a fair share of narcissists but most of us who gaze in the mirror don't hear the "your the fairest of them all" well maybe we get a couple of days like that but they are view and far between. I live in a culture where we have embraced inferiority as if it where God given. We live in the "wee culture" everything is wee and that sometimes includes our God dreams. We don't have a problem embracing small and there is a place for that, especially when we are face to face with God but I'm talking about the inferiority virus that gets a hold of us and kills dreams, drowns passion and hemorrhages hope.

I think that the Church treads a lot of water in this small nation because we are often thinking bigger is better, we look to every other nation but never around the table.Often we want Hybels, Warren and so on but maybe its time we had the eyes of Samuel?

Ancient Celtic Christianity Could Show the Way...Christianity Can Become Contagious Once More Across Europe and North America in the Twenty-First Century.

Let me leave you with Nelson Mandel's inaugural speech "we ask ourselves: who am i to be brilliant, gorgeous, talented, fabulous? actually, who are you not to be? you are a child of god. your playing small does not serve the world. we were born to make manifest the glory of god that is within us. it is not just in some of us, it is in everyone." (quoting marianne williamson)
Posted by jasondscott at 13:51

you do have to admit that narcissist was a looker...

and sadly I don't know much about ancient celtic Christianity - I'm off to google...or wikipedia