TO OBEY GOD IS LIFE 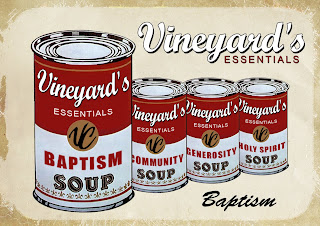 Last Sunday at the Vineyard we had an amazing Baptism Celebration with up to 25 adults and young people being baptised! The sense was, that the Kingdom had broke in and the cool part was people being born again into the Kingdom.

What was it that triggered this great morning with 11 people signed up to be baptised and then 14 spontaneous baptisms and 2 people coming to faith. There was a great sense of God among us and a sense of expectation; experiencing the Holy Spirit leads to greater expectation.

Through my talk to introduce baptism and through the stories we heard, was one common theme. There was no hype or feeling of high emotions as people told their stories what was evident was the central theme; Obedience

At the creation of humankind, two things are assumed about the man and the woman in the text. The first is that God was in an intimate relationship with them. The text tells us that God had planted a garden east of a land called “Eden,” which would be fed by the waters that flowed from that land. God set Adam in Eden to serve God and protect creation. Adam walked intimately with God. God walked freely with him in the garden (with nothing in-between them).

The second assumption is that humankind, created as male and female, were equally as intimate. The text says that they were “naked and not ashamed,” metaphors for Intimacy. On the basis of these two assumptions, the man and the woman are given three more assignments.

The assumptions: The sovereign, omnipotent Creator had created humankind to walk intimately with him and with one another.

The assignments: On the foundation of those two assumptions, human beings were given three assignments by God: to multiply the image of God through the bearing of children, fill the earth with that image and rule the earth as God’s ambassadors.

The stipulation: The only stipulation God placed on the man and the woman was that they were to obey him. The specific test of their obedience was that they not eat from the tree of the knowledge of good and evil. As is seen in the narrative with the serpent, this obedience was based in faith, faith that God’s Word was true and God’s character was trustworthy. The honour of God’s very Name (to use Exodus language) was at stake.

The reward for obedience: While no specific reward is described or explained in the text, you could assume that it would be the fulfilment of all that God had purposed. This could be seen as the outcome of being able to eat from the tree of life as often as they wished. To obey God is life.

The consequences of disobedience: If the man and the woman ate of the tree of the knowledge of good and evil, God told them that they would surely die.

John Wimber used to say that ‘We want to grow up before we grow old’. The way that we measure maturity is the length of time it takes you to obey. How quick we can give our yes to what the father is doing is a sign of how mature we are. God is showing up in the Vineyard, we are seeing teenagers come to faith, our family support worker is seeing favour and openness as she steps out and offers prayer. We are hearing God speak through the prophetic/words of knowledge on Sunday celebrations, seems to be more clarity and people are responding.

“Our job like experienced surfers is to recognize a wave of God’s spirit and to ride it. It is not our responsibility to make waves but to recognize how God is working in the world and endeavour to join Him”. Rick Warren.

What can we learn from Sunday?

When we step out in obedience God favours us with his presence and the Kingdom is ushered in. Our job is to obey, risk (step out in faith) and see what God does.

We need to be aware of the manifest presence of God among us and respond. This is not just about Sunday mornings but our Monday to Sunday.

What does the manifest presence of God look like and how do you respond. How long does it take you to respond to the Spirits promptings?

You couldn't have said it any better.