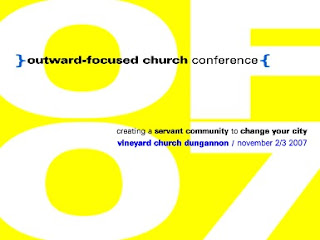 This weekend we had our first conference but this was more than a conference. It rocked!
Just before we planted Vineyard Church Dungannon I came across a Church called Cincinnati Vineyard. I loved how they were doing Church, and so about two years ago I contacted their senior pastor Dave Workman. There was that same tribe connection as our values and DNA lined up. Anyhow I invited Dave and his wife Anita to come do a conference on 'outward focus'. They came with a small team including Mark Lutz, (who also spoke) his wife Elizabeth, and Jennifer King, all of whom are gifted and amazing people. God poured out His Spirit during the weekend so much so that we are thinking on renaming it 'The Crying Conference'.

"A farmer went out to his field to sow grain. As he scattered the seed on the ground, some of it fell on a footpath and was trampled on; and the birds came and ate it as it lay exposed.Other seed fell on shallow soil with rock beneath. This seed began to grow, but soon withered and died for lack of moisture.Other seed landed in thistle patches, and the young grain stalks were soon choked out.Still other fell on fertile soil; this seed grew and produced a crop one hundred times as large as he had planted." (As he was giving this illustration he said, "If anyone has listening ears, use them now!")

I was awakened over the weekend again to sow generously, scatter faith, hope and love everywhere possible. We don't have to be all that strategic, we just need to be a whole lot loving. Dave brought out a great point during the weekend; 75% of the seed doesn't make it(1 in 4 does). These are not great odds and maybe provide a slight justification to be disillusioned. So here's what I'm thinking; for everyone here at the Vineyard and others who read this, we need to get bigger buckets or maybe just bigger hearts for the lost, the least and the lowest and get out there and start scattering with astonishing generosity.

Strange thing happened on the Friday evening, Dave showed a video of a Baptism from Vineyard Cincinnati, we didn't know anyone being baptised yet as we watched it there wasn't a dry eye in the building! We were made for this and I'm convinced more than ever that mission is why the Church exists.

Onward and Outward!
Posted by jasondscott at 08:18